The Mars Lab is both an active educational resource and a space robotics, astrobiology and education research facility.

Here are some of our current projects: 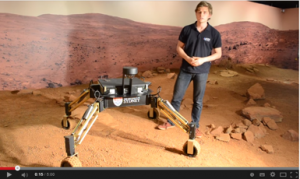 MAMMOTH Rover – Will Reid
Robotic rovers are currently used to great effect for the in-situ exploration of the Martian surface. To meet more challenging planetary exploration goals, rovers will need increased mobility over scientifically interesting rough terrain and the ability to achieve a wider variety of mission goals. The MAMMOTH (Mars Analogue Multi-Mode Traverse Hybrid) Rover is a reconfigurable platform developed by engineers at the Australian Centre for Field Robotics that is being used for research into greater rover mobility over harsh terrain.

MAMMOTH has four legs, with a wheel at the end of each, allowing it to perform energy efficient driving over flat terrain, while utilizing complex clambering and body weight shifting manoeuvres when traversing more challenging surfaces. To achieve efficient operation of MAMMOTH’s actively articulated mobility system a kinematic model is being implemented that relates the motion of each of its joints to its overall body motion. This model is used for ensuring stability of the rover during all operations along with planning for future motion. Sampling based motion planning algorithms are being implemented to sample the rover’s high degree of freedom configuration space and formulate feasible motion plans considering stability, energy usage and mission goal performance constraints.

Estimating how safe it is to traverse over a terrain is an essential requirement for planetary rovers. State of the art techniques involve using stereo cameras to create a digital elevation map of the environment. Kinematic modelling is then used to estimate the configuration of the chassis which is then correlated with vehicle stability. However maps built from on board sensor data are often incomplete due to obstructions. This research projects presents a method using Gaussian Process framework and machine learning to accurately estimate the traversability as well the uncertainty in these occluded areas. Experimental trials were conducted on the Mawson rover with its rocker bogie chassis, RGB-D camera and the localisation system. Results show a significant improvement over state-of-the-art techniques both in accuracy and its ability to perform estimates in occluded areas.

During planetary exploration, it is important for the rover to have an estimate of the outcome of its actions to maintain platform safety. Modelling the rover’s behaviour is difficult due to lack of data and the complex nature of interaction between the rover and the terrain. This research presents a motion planning approach in which the rover learns the outcome of its control actions by carrying out a set of movements many times over a range of terrain and measuring the error between the expected and the actual outcome. The control outcome is then represented statistically using a Gaussian process regression model. Experimental trials with the new motion planning policy show that planning under uncertainty improves safety of the platform and considerably reduces the chances of the rover getting stuck.

The ability to perform manipulation from a mobile platform has played a critical role in the success of the current rovers on Mars. A precise mobile manipulation system allows the rover to interact with the environment and conduct tasks such as instrument placement and sample acquisition. The Continuum rover features a large 6 degree of freedom robotic arm equipped with a laser scanner and two cameras mounted on its end effector. This research project explores how the arm can be used in conjunction with the laser scanner to maximise the information gathered from scientific targets such as the terrain surrounding the rover. Challenges include integration of laser data into the rover’s motion planning algorithm and finding collision free arm trajectories which are also energy efficient.

A mandate for the program is to encourage and promote sustainable and meaningful change in teaching and learning. It also seeks to prepare students to live and work in an increasingly STEM driven highly interconnected world. To this end we are trialling the progressive teaching method of Project Based Learning (PBL) to assess the impact on learning and teaching style.

With its emphasis on requiring students to take control of their own learning and generating their own meaningful research questions, PBL is believed to be well-suited to producing learning and teaching change. Project Mars is a 5-6 week unit for Year 9 chemistry and physics. It seeks to draw classes through the curriculum with a meaningful driving question to explore: Could Mars have supported life? In their attempt to answer this question, young people need to work with others and use a variety of science inquiry skills.

They need to identify questions to explore, learn science content to inform their research, design a research question and hypothesis, conduct a scientific investigation using the Mars Lab Mawson rover and its ChemCam instrument, collect and analyse data, interpret the results, report on findings and make a formal presentation of their findings to the Mars Lab science advisors.

The PBL unit is being trialled by a selection of high school classes with pre and post surveys and interviews with participating students and teachers.

Data from pre and post student surveys and case study data are analysed to investigate changes in student competencies such as critical thinking, problem solving, collaboration, creativity/innovation and communication. Data collected pre and post project from teachers involved in Project Mars is examined to look for any change in teacher attitudes and teaching practice.

Research Project
Attitudes to science and intentions regarding future science study
Research is being undertaken to determine the effects of the Mars Lab project on students’ attitudes to science and on teachers’ approaches to science teaching. By engaging learners with real science, the Mars Lab project aims to help address a three-decade long decline in science enrolments in senior high school. Baseline data is collected from students and teachers via online surveys and compared with post-experience survey and interview data. Students’ pre and post survey results are analysed to determine whether there is any change in their attitudes to science or in their intentions regarding future science study and careers in science.

Pre and post survey data analysis is also undertaken to investigate changes in the students’ understanding of the nature and practice of science, since traditional school science education may not reflect the way that science is actually undertaken. Data from teacher surveys and interviews is analysed to determine whether there is any change in their teaching practice from pre to post project.