Mars One – A one way ticket to Mars
A video conference in which 9 schools get to ask questions of 6 Australian Mars One candidates — 3 in the Mars Lab studio and 3 online from around Australia.

Student reporter, Caitie Browne, interviews Chris Hadfield
Find out Chris’ favourite space food, what it’s like to blast off, why you don’t need a hair straightener in space and why astronauts get so much homework!

Isabelle Kingsley, Mars Lab educator, interviews Chris Hadfield
We ask famous astronaut, Chris Hadfield, about mentally preparing for a space mission, the special challenges of travelling to Mars, the role of robots in space exploration and … would he go to Mars?

Mars One
A one way ticket to Mars – we interview 6 Australian Mars One candidates.

Dr Abigail Allwood
She’s an astrobiologist, an Australian and she is one of the scientists leading the Mars 2020 Mission.

Dr Chris McKay
What if we find life on Mars? Should we terraform Mars?

What happens in the Mars Lab?
A quick video introduction to Mars Lab education programs and the student experience.

Students talk about Mars Mission 5
A short video made by PLC Melbourne Junior School of their student experience with Mars Mission 5 program.

About the Mars Yard 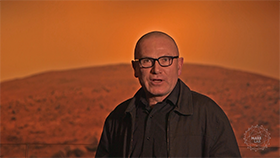 Intro To Mars Yard
Matthew introduces the NBN Mars Lab, explains how it was built and how it is used by astrobiologists, engineers and high school students.

EMR-Mawson
Isabelle from the Mars Lab introduces robotic rover EMR-Mawson, and explains all its features used by students to carry out missions.

The EMR-Mawson and ChemCam instrument
Isabelle from the Mars Lab talks about the ChemCam virtual instrument onboard our EMR Mawson Rover.

Time lapse of our robotics engineers building MAMMOTH
Engineers from the Australian Centres for Field Robotics kindly kept a camera running for many months to show us the building process of the MAMMOTH rover.

Mars Vox Pop!
Caitie Browne loves Mars facts and talking about Mars, so she decided to visit some every day people in their homes (just by knocking on their doors!) to find out what they know about Mars and hear their views on space exploration and colonisation.

FireStar Tours
How would you sell a holiday on Mars?

Mars vs Mars Bar
Caitie Browne compares Mars to a Mars Bar. How many similarities and differences can you find?

Chris Tinney
Chris, Prof of Astro Physics, talks about his career and how exciting it is to hunt for planets that are potentially habitable.

Monika Kress
Monica, Prof of Physics at SJSU, explains how her research is attempting to find earth-like planets in the habitable zone around stars.

Jill Tarter
Jill, B.M. Oliver Chair for SETI in California, explains that science as a career is incredibly rewarding and phenomenal fun.

Roger Summons
Roger, Prof of Geobiology at MIT, talks about his work on Curiosity’s SAM instrument which looks for small organic molecules in the soil of Mars.

Adrian Brown
Adrien from SETI talks about the possibilities of finding life on Mars and the instruments and techniques used to look for evidence of life.